Blog
Stay up to date and check out our weekly blog posts about community, wellness, and connection.
It's More Than Just Sweat! 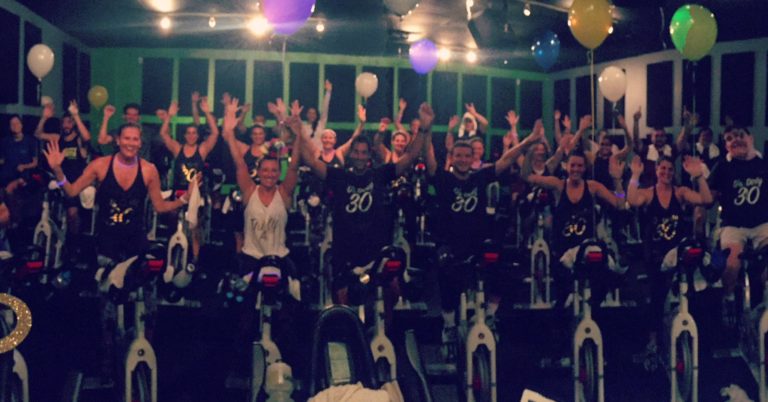 When does a fitness studio become more than just a place to sweat? Ask Daniella Faust, who spent her 30th birthday celebration at REV sweating it out on the bike. The event was a total surprise - Daniella had no idea she would be celebrating her 30th at REV. Her friends and family, however, knew exactly how much the REV tribe meant to her. As an avid and loyal REV client, they knew there was no better place, no place more special, to celebrate such a big day.

Daniella originally planned to celebrate her birthday at a Sam Hunt concert in Nashville, but life got in the way and plans fell through. Unbeknownst to Daniella, David, her boyfriend, and her best friend Hanly (another REV client) began working behind the scenes to plan a private birthday ride with one of her favorite REV instructors, Nick Rodricks. Hanly and David worked directly with the REV co-owner Rick Zambrano to customize everything. “I’ve been working in events my entire career and it was just so wonderful working with REV because they accommodated every single need and request,” Hanly explained after the event.

The birthday girl was the only one left in the dark. David told her to be ready for “something” at 11AM the next day. Daniella was a little frustrated with him since she always takes Jami’s 10AM Saturday morning class. “I couldn't believe he hadn't taken that into account,” she said jokingly as she looks back on the day. So she signed up for Sean’s class at 8AM because she wasn’t going to miss out on her Saturday AM sweat even after all of the excitement of another surprise – David proposed on Friday night, she said yes! Daniella explained, “People expect you to be there, I couldn’t be a no show. Plus, I was just pure adrenaline at that point.”

On Saturday, when they arrived at McHenry Row, Daniella thought David was taking her to a surprise brunch with her whole family in town to celebrate her birthday and the engagement.

And then, David took her spin shoes out of the trunk.

Daniella was floored. “I just started asking all of these questions like, who’s teaching the class?! David said that it was Nick. I was freaking out. I was just floating on air.”  The class was overflowing with energy. After teaching his normal class earlier that morning, Nick brought 110% energy, taking song requests during class and hanging out at the end to celebrate. “They make you feel like you are a part of their family,” Daniella said.

Hanly was awestruck by the REV fam’s support. The front desk staff shared so much enthusiasm in the celebration, setting things up as if they were event planners themselves. “You can’t put a value on everyone being genuinely excited for Daniella and her fiancé. Seeing people that wouldn’t normally spin was priceless to everyone in the room,” Hanly said.

Daniella’s 30th birthday celebration at REV was incredibly memorable for Daniella, her friends, family, and everyone at REV. For her family to know just how meaningful the REV community is for Daniella so as to throw her 30th birthday in the studio is truly something special. There is something unique about a community that holds you accountable and pushes you to your limits through an enormous sense of love and family. Daniella’s birthday was a celebration of love and family, as is every single day and every single class at REV. “I just want people to know how special REV makes you feel, whether they know you by name or not,” Daniella said. “Now I’m praying for a bachelorette ride.”

Learn more about planning your own event at REV here.