Blog
Stay up to date and check out our weekly blog posts about community, wellness, and connection.
How I Found My Inner Badass! 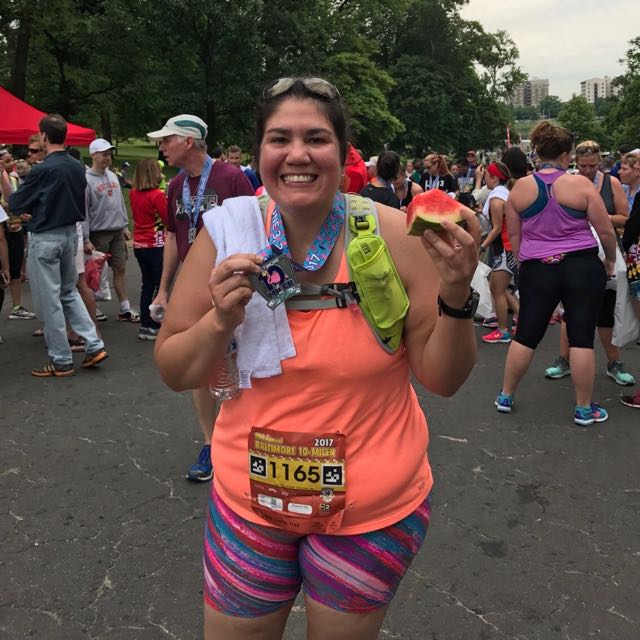 Andrea Selkirk is a loyal REV McHenry Row client who resides in Columbia and works in D.C. Her fitness journey is just beginning and she is already kicking ass! Read on to hear about her first ever 10 miler! The entire #REVfam could not be more proud of her and we can't wait to see what she does next!

HOW IT ALL BEGAN

I began my journey at REV like many, with a friend. I had been intermittently exercising and training for the occasional 5K, but never committing to any one form of exercise since graduating from high school.

It was the energy of the room, everyone pushing together, yet still being able to focus on myself, and it being just me and my bike that hooked me.

I quickly became a regular in Esther’s Sunday 9AM #ChurchofEC, and I was inspired to do more as Esther often spoke about her Ironman training. I often flash back to the time when my brother in law beat me in a 5K race on a family vacation, and my competitive nature just can’t live with this memory. It was time. Excuses are just that, excuses, and REV helped push me back into an active and healthy lifestyle.

My longest distance yet. Goal: To run the entire race under 2 hours.

I was diligent about my training. I ran 3 days a week, REV 1-2 times per week, strength training 1 day, and 1 rest day. REV helped me mentally prepare for the race. REV taught me how to mentally push past the hard parts in my training and kept me going on long runs. I would often call to mind the time when Esther got on the bike after completing her Ironman, even though she was in a lot of pain, to push myself harder during training.

I was scared out of my mind!

A 1-mile walk and I’m waiting for my wave of runners to go off. Now, my Bluetooth headphones won’t connect. I’m in a total panic, trying to mentally prepare myself for how to run 10 miles without music (I’ve never run without music, EVER). Suddenly, my wave is starting to jog, I cross the start line, and like magic my headphones connect and I’m off!! I’ve got this now!

In retrospect, my headphones not connecting was the best thing that could have happened because all of my nervous energy was focused on that instead of the negative self-talk.

MILE 3 – SHIT – What am I doing? I don’t have to be doing this. Why am I doing this?  You still have 7 miles left! Are you crazy? Luckily, the universe was looking out for me that day and just as soon as my negative self-talk started, the song “Lose Yourself” came on which Esther sometimes plays on Sunday mornings and I remembered I AM ANDREA FUCKING SELKIRK and I GOT THIS!

MILE 9 – No great accomplishment comes without struggle. Those last two miles were the hardest. I kept reminding myself that every step I took was farther than I had ever ran before. I rounded a corner and a long hill I was battling continued on, I needed to walk. I took 20 walking steps, looked at my watch, and knew that if I wanted to finish in under 2 hours I had to start running now, so I did.

THE FINISH LINE – THE GREATEST MOMENT OF MY ENTIRE LIFE SO FAR! I had to remind myself to stop running. Then, I saw my boyfriend, started fist pumping and screaming, “I did it under 2, I did it under 2!”

BACK WITH THE REV TRIBE

After the race, I attended Esther’s 6AM Friday class. She sought me out knowing I had my race the previous weekend. One of her final questions being what’s next for me, I mentioned maybe the Baltimore Half Marathon not yet being 100% sure.

At the beginning of class, Esther announced my accomplishment and the whole class clapped and congratulated me. I was completely overwhelmed by the support of the entire #REVtribe. She also slipped in there that I would be running the Baltimore Half Marathon. I guess it’s 100% decided now!

The Baltimore Half Marathon

The Baltimore 10 Miler - Conquer that final hill, no walking next time!!!!

People often ask how did you do it? I tell them it’s a lot of time and energy and you have to really want it, but it’s so incredibly worth it. I’ve learned so much about myself, I feel like for a long time I had lost a part of myself, and I have really enjoyed finding my inner badass again!

Back to Blog
« Welcome to REV BEATS! | Turning My Passion Into A Business »