Blog
Stay up to date and check out our weekly blog posts about community, wellness, and connection.
#REVtribe: Heather Pruger

WE asked. YOU answered! The #REVtribe submitted stories on how REV inspired them to step out of their comfort zones. Turns out, the #REVtribe is what makes REV so freaking badass. Tune in each Monday as we share one of YOUR stories in hopes to inspire the entire tribe to dig a little deeper and most of all to give you the courage to live the life you love!

As we sweat, we become. We become: One Team. One Heart. One Tribe. 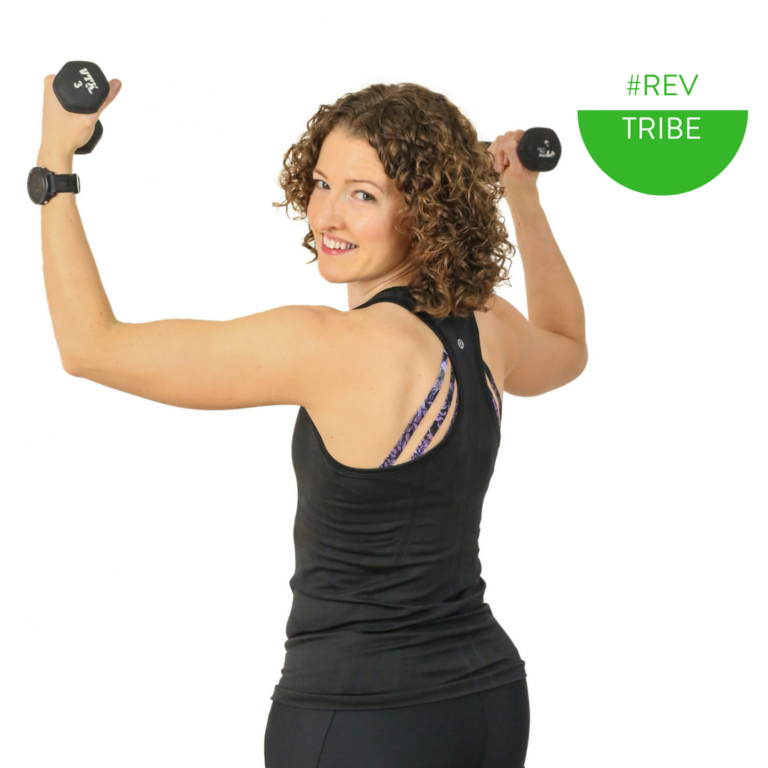 "When Esther encouraged me to write something for Rev, to submit a story, I was flattered. I was also intimidated. What do I have to say that people would actually be interested in reading?  I agreed to try to come up with something.

I tried. Everything I wrote seemed too personal, too trite, too revealing, too contrived, too...something. Quite a few false starts later, I decided to tell Esther that I just couldn’t come up with anything.

But I didn’t actually get around to telling her. On my way home, it hit me. Actually, a P!nk song hit me: “What do we conceal? What do we reveal? Make that decision every day. I like to make-believe with you. That we always speak the truth...ish."**

So, I decided to try one more time.

The truth is that I don’t have a story about how REV made me into a superhuman physical specimen who can leap tall buildings in a single bound, win marathons at 17 months pregnant, or podium in triathlons with both hands and one foot tied behind my back. The truth is that I am intimidated by quite a few of the members of the REV tribe who can (in my mind, at least) do all these things. The truth is that, being a (very) competitive person, there have been many times that I’ve felt inadequate at REV because I can’t/don’t do any of these things. Like I am not pushing myself hard enough...like I am not and will never be good enough.

This isn’t the fault of anyone at REV. The truth is that I compare myself to other people. It isn’t their fault; it’s something that I do. That comparison/competition is one of my personal demons that I’ve let have a lot of control over my life for a long time. It is also something that I had never really acknowledged about myself until recently.

I first started coming to REV when my yoga studio closed.  For me, yoga had been an escape--a place where my goal was to turn off my mind--to silence my inner turmoil--at least for the 90 minutes of each class. (Of course, I even turned that into a competition--literally--I participated in the regional yoga championships for a couple of years). Initially, it seemed to me that REV provided a similar escape, except that instead of encouraging me to silence my inner voice, REV drowned it out. Just loud music, sweat, and a challenging workout. Perfect.

It took a few weeks before I started to listen to what the instructors were saying. I realized that they weren’t just telling us to go faster, gear up, and all the usual spin stuff. They were sharing their life experiences--their stories--their vulnerabilities. And, they challenged me to think more about my own.

“I let the walls come down. I let the monster out, and it’s coming after me. Do you feel exposed where it hurts the most? Can you wear it on your sleeve?”**

Initially, I found many of the concepts--like self-love--foreign and frustrating. I am usually very guarded with my emotions, not to mention any weakness or vulnerability, but my instinct to compete took this as a challenge. It turns out that, as dangerous as these internal demons can be, they sometimes push you in the right direction.

The truth is that this didn’t result in a life-changing epiphany, but it has gradually nudged me down a path of greater vulnerability, introspection, and curiosity.  The truth is that I haven’t figured out self-love, but I have made deeply meaningful connections that give me space to be open and vulnerable and where I can get real, honest feedback and a tap on the shoulder when my demons are steering me down the wrong path. The truth is that I haven’t beaten my demons, but I have realized that it is more productive to accept that the exist and to observe and try to understand them than it is to try to ignore them or drown them.

There will always be someone who is “better than” me, and there will probably always be some days when I’m not okay with that.  But the truth (no -ish) is that, while I still have a long way to go, today I am stronger--both mentally and physically--than I ever have been before, and I have many members of the REV tribe to thank for much of that growth."

**Lyrics from Secrets by P!nk

Back to Blog
« REVBeats: REV It Up Challenge Playlist | Instructor's Summer Reading List »