Blog
Stay up to date and check out our weekly blog posts about community, wellness, and connection.
Sean: Open Doors to New Opportunities 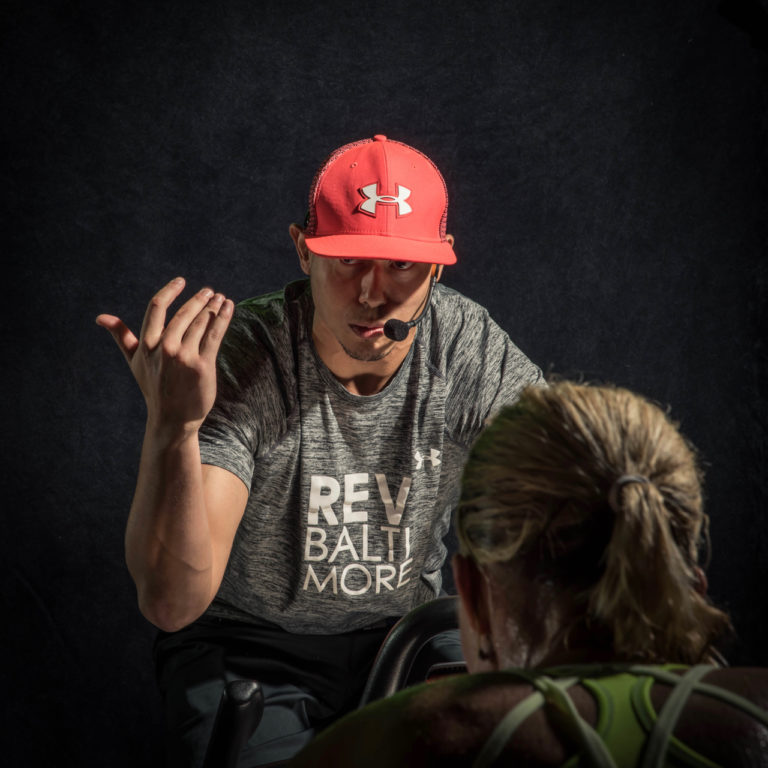 Though he is a natural on the podium, Sean Sanders never would have thought he would be a REV instructor. A Tennessee native, Sean grew up playing football. If you asked him what “spin” was at that time in his life, he couldn't have told you. Little did he know it would become a huge, unexpected passion in his life when he moved to Baltimore. It would open many doors to new opportunities, new friends, and a new life.

Sean moved to Baltimore in 2012. He got an internship with FX studios where REV co-founder Rick Zambrano works out when he’s not working tirelessly to make REV one of Baltimore’s best fitness studios. Sean met Rick and started working at REV’s front desk a year after the studio opened.

During his time working the front desk, REV slowly started becoming an integral part of Sean’s life. It was a second home. He loved getting to know the clients, as more and more new clients started becoming regulars. As the studio rapidly grew and Sean began to pick up more shifts, it was Esther (not surprisingly) who finally encouraged him to try out for an instructor position. “She literally told me to stop ‘bullshitting around’ and be an instructor,” Sean said… “encouraged” would be a gentle word. Esther pushed, and - in line with her overall approach to life - she pushed hard.

Yet despite working frequently at the desk, Sean had not actually taken that many classes. He was anxious to go for it. “But I went for it anyway,” he said. Regardless of all anxiety and hesitation, he simply just went for it. This mindset embodies exactly what REV aims to foster throughout its own culture. Taking the leap was only the beginning for Sean. Instructor training was not easy. “It was definitely a learning curve… I always thought I could do it but was constantly trying to figure out how exactly to get better,” Sean said. It was not for another five months before Sean would finally begin to feel fully confident in himself.

Sean’s first class was all vitality and spirit. As a community ride, all his friends showed up bringing nothing but loud, fun energy. He was neither nervous nor anxious before his class, but ready. “All I felt was ready.” Sean left all doubt and uncertainty behind in the months of training leading up to his first class. After pushing through his own self-reluctance and questioning, Sean had emerged from whatever used to obscure his vision - this moment was clear for him. He was meant to be there.

Today, Sean’s favorite part about teaching is seeing people change, physically and mentally, to reach goals they set for themselves. After going through his own challenges, his goal is to help his clients overcome their own. “I feel like I’ve learned this crucial skill of communicating - and not just ‘talking’ - but pushing and inspiring people to break the limits they set for themselves.” Becoming a full-time instructor was another challenge Sean faced. To show up almost every day, multiple times a day, as a leader with a high level of energy and a positive attitude is extra responsibility he took on with open arms. Why? Because though he may be a source of inspiration for his clients, his clients are that same source of inspiration for him.

If it was not for Esther and Rick and their constant support, Sean would not be where he is today. “They gave me the opportunity to do something and be something different.” They taught him how to set goals to constantly better himself. His main goal today: “Help as many people as I can. My goal is to make each class so that all my clients are able to let go, have fun, and just enjoy their time in that room for 45 minutes.”

Sean’s journey from front desk to instructor is an example of walking through an open door when opportunity presents itself. It can be scary and it can be uncomfortable, but a whole new perspective lies on the other side. Sean opened the door and unlocked this unknown potential by taking the first step and not looking back. So do what scares you. Take the first step. You may discover a part of yourself you never knew was there.