Blog
Stay up to date and check out our weekly blog posts about community, wellness, and connection.
Moving With A Purpose 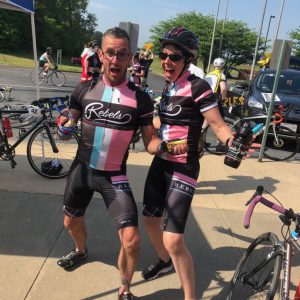 When the REV tribe takes its community efforts outside of the studio, the power of the REV tribe shines in full-force. Amanda Lehning and John Flannery are perfect examples of this. As a REVBarre instructor, Amanda began hearing about an organization called Moveable Feast from her loyal clients, Erin Dorrien and Abby Ferretti Jackson. One day after class, Erin and Abby told Amanda about a team of people who ride from Ocean City to Baltimore every May to raise money and awareness for Moveable Feast, a nonprofit that works to provide food to Marylanders with HIV/AIDS and other serious illnesses.

The ride itself is called “Ride for the Feast.” At first, Amanda thought, there’s no way I could ever do that. But, over the next few months, other riders who were part of the team - Rebels with a Cause - began taking Amanda’s barre class every Saturday. Hearing more and more about the ride made Amanda think she could actually do it; however, it was her good friend, John Flannery, a fellow REVer and former REV Barre instructor, who ultimately pushed her to sign up so they could ride together. “I'm so lucky to have him as a friend, and I knew that he would make sure I was safe and laughing the entire time,” Amanda said. 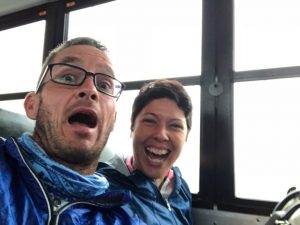 John has done the 140 mile Ride for the Feast three times before this year. A driving force getting him to the finish line each year is that he was diagnosed with HIV 10 years ago. John rides for those that can’t and firmly believes that food is medicine, and proper nutrition is a major factor in improving overall health outcomes. Both John and Amanda signed up to ride with team Rebels with a Cause, which has ultimately raised $131,087 - a total that will feed 85 people for an entire year.

The day of the race, Amanda was not nervous; in fact, the saying “ignorance is bliss” is most appropriate as Amanda had never biked more than 35 miles before. She simply did not know what to expect. She went into the ride with an open mind and an open heart, knowing that she was riding with a purpose alongside some really great people. Amanda rode with Erin Dorrien and her husband, Amir, as well as REV clients Chris and Amy Borth. The pack had made a promise to ride together the whole way. At mile 80, they began to feel the impacts of heat and exhaustion. But through continuous laughter and knowing that they were a team, Amanda and the others rode forward.

As John’s 4th time doing this ride, he and a small group decided to ride to the start line the day before - this was an extra 100 miles. From Friday to Sunday, John would ultimately cover 240 total miles. On Saturday morning, John was a little nervous about the next 140 miles, having just covered 100 miles the day before. “I just kept in mind that the people for whom we were raising money did not have the luxury of riding their expensive bike across the beautiful, but sometimes-smelly Eastern Shore.”

John and Amanda biked together the last 40 miles. It was a rainy day, but the crowd at the finish line was cheering them all the way through. While Amanda credits John for motivating her to sign up; John in turn was inspired by Amanda’s bravery in the face of something completely new and unknown which gave him some extra motivation for his 4th ride.

In the face of something new, challenging, and - most importantly - meaningful, the REV tribe is never afraid to step up to the plate. No matter how you are moving through life - on a bike or on two feet - moving forward with purpose and staying with your team will allow you to fight for something bigger than yourself. “While the ride is a physical and mental challenge, every single person is there because they believe in the work of Moveable Feast and know that this fundraiser is critical for the organization to serve those who benefit from the food they provide. The weekend is a blast, but people like John made sure I never lost focus on why we were there,” said Amanda.

The REV team is beyond proud of John and Amanda for showing us the importance of supporting one another, moving with a purpose, and moving with a team over the course of 140 miles.